"The sweet scent of straw lingers, the voices still call, the great beauty of falling salt, and the comforting weight that the enormity of the straw bale structure placed on my heart remain."

First, the fragrance of straw. Walk past sepia photographs of ancient kerbstones. Enter a low passageway roofed with eucalyptus (or local tree) branches. Drawn by the glow of a translucent veil at its end, step into a tall, circular chamber. A glowing column of white particles falls from the ceiling, forming a mound on the floor that increases over the run of the installation. Above the faint whisper of the salt fall, the sound of children?s voices in many languages comes and goes. Stand here, or sit on the straw bales around the periphery of the room. Call up private memories; speak the names of children or others you wish to recall. After exiting, you may write a name or message on a card provided and place it in a niche in the straw bale wall.

The Circle of Memory is a rebar-reinforced straw bale passageway and chamber. At the end of the passage, a panel fabricated of hog gut hangs from the ceiling. In the center of the chamber ceiling, a motorized dispenser with two spotlights attached releases a stream of salt onto the floor, which is covered with heavy canvas. Beneath the canvas, lighting and other electrical cords run around the perimeter of the chamber. Sound equipment is concealed around its upper circumference.

"I found it utterly beautiful, from the moment I set foot in the entry way." 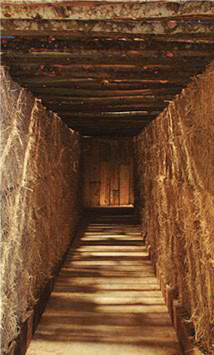 (may be adjusted to venue requirements)

"Probably the most unusual show I have ever seen."

Straw bale
Rather than stone or other "indestructible" materials appropriate to earlier cultures, we have chosen straw formed into bales and reinforced with rebar. Straw bale is easily obtained, inexpensive, renewable, non-allergenic, pest-proof, and packed so densely it is non-flammable. Its' texture and construction, comprised of fragile elements, symbolizes both a community's cohesion and the delicate nature of a child's life.

Hog gut
Like straw bale, hog gut is organic and surprisingly strong when fabricated. The translucent curtain that screens the interior evokes the veil between life and death. Some religions conceive of this veil as permeable at certain periods of the year, such as the Days of the Dead and All Souls Day.

Salt Falling
Salt forms a vertical line at the center of the inner space. It is a reminder of the "axis mundi," the invisible axis around which the earth rotates. Many traditional cultures visualized this axis as the center of their community and represented it as a central pillar in communal structures. It represents both timelessness and time passing; each grain falls; yet the thread continues.

An essential element of the earth and the human body, salt also represents the healing power of tears. 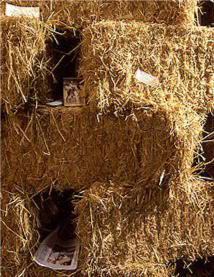 The installation will open with a community ceremony commemorating children we have lost, locally and globally. At the end of each exhibition the mementos left by visitors will be collected into a symbolic container and included in the next installation.