"I have never been more touched personally and professionally than I was by this experience." 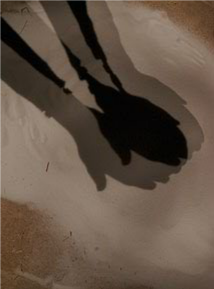 "Having worked at the Oakland Art Gallery for more than two years, I have never been more touched personally and professionally than I was by this experience: not only by the great gift and wondrous creation, Circle of Memory, but by the teamwork involved. The sweet scent of straw lingers, the voices still call, the great beauty of falling salt, and the comforting weight that the enormity of the straw bale structure placed on my heart remain.

Your overall organization and planning was impeccable...to work with such a sensitive issue and put it out into the public must happen with great care and responsibility. I learned much from the grace with which you brought forth the gift of healing, seeing and being. Circle of Memory broke the gallery attendance records daily. We had endless requests that the installation be permanent and inquiries as to where it was going next. No one who experienced it was the same afterwards. Humbled, awakened, awed, silenced, inspired, softened and changed, visitors would look to the gallery staff and share their stories.

The universal shape conjured up memories of various countries and traditions. Through the sharing of grief, the comforting circular structure, and the many hand written notes, a universal place was accessed in the viewer. Mothers came with daughters to this show. Parents who had lost children brought their children who had lost children. Small preschool children visited and demanded that their teachers bring them again. Old and young, grieving and joyous, an array of nationalities told their stories and I saw something in them come back to life... One woman came on the anniversary of the death of her son. She played the flute for him for hours. She came again the following week and the one after, continuing to return with new friends each time. She told me that this exhibit had finally freed her from the deep, impenetrable grief of his loss.

I was astounded that the many reviews of the show were not usually in the art sections of the papers, but in the living sections or on front pages. To me, this indicated the success of this "art" as it bypassed the intellectual debate of art and went directly to the heart of the matter; the profound effect The Circle had on those whom it was made for. I will gladly act as a reference and/or spokesperson for the gallery and would be delighted to talk with anyone considering the housing of this installation."

"A place for people to be-in memory, in thought, in peace, in pain." 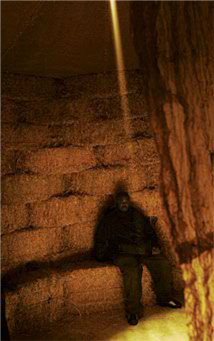 "I found it utterly beautiful, from the moment I set foot in the entry way. The light beckoned me forth and that gorgeous skin-like veil made the space inside so mysterious and at the same time approachable. It felt so familiar too, so like the Irish cairns, once you were inside, waiting for your eye to adjust to the light. And then slowly one's other senses tuned in too-to the sounds of falling salt and the voices of the children, speaking so softly but adding so much to the presence of peace in the space. Sitting there, smelling the straw with John and the kids was a rich and full moment. The kids fingered and handled the salt pile and the falling stream. It felt so safe and contemplative. I thought about the construction and the lighting and the choice of materials and it all felt right and complete. A place for people to be-in memory, in thought, in peace, in pain. I wrote out my father's name and stuck it in the straw bale wall. I felt blessed that I had no children's names to place there and thought of those who did."

"On a personal level, it provided a place of solace for me after my grandfather's death." 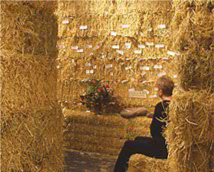 "Although this exhibit was not what our regular gallery attendees expected, they loved it. It also drew many people who normally would not step into a gallery; it was a good introduction for those who were not familiar or were intimidated by the visual arts. On a personal level, it provided a place of solace for me after my grandfather's death. I went there right after the funeral, and it was the thing to do."